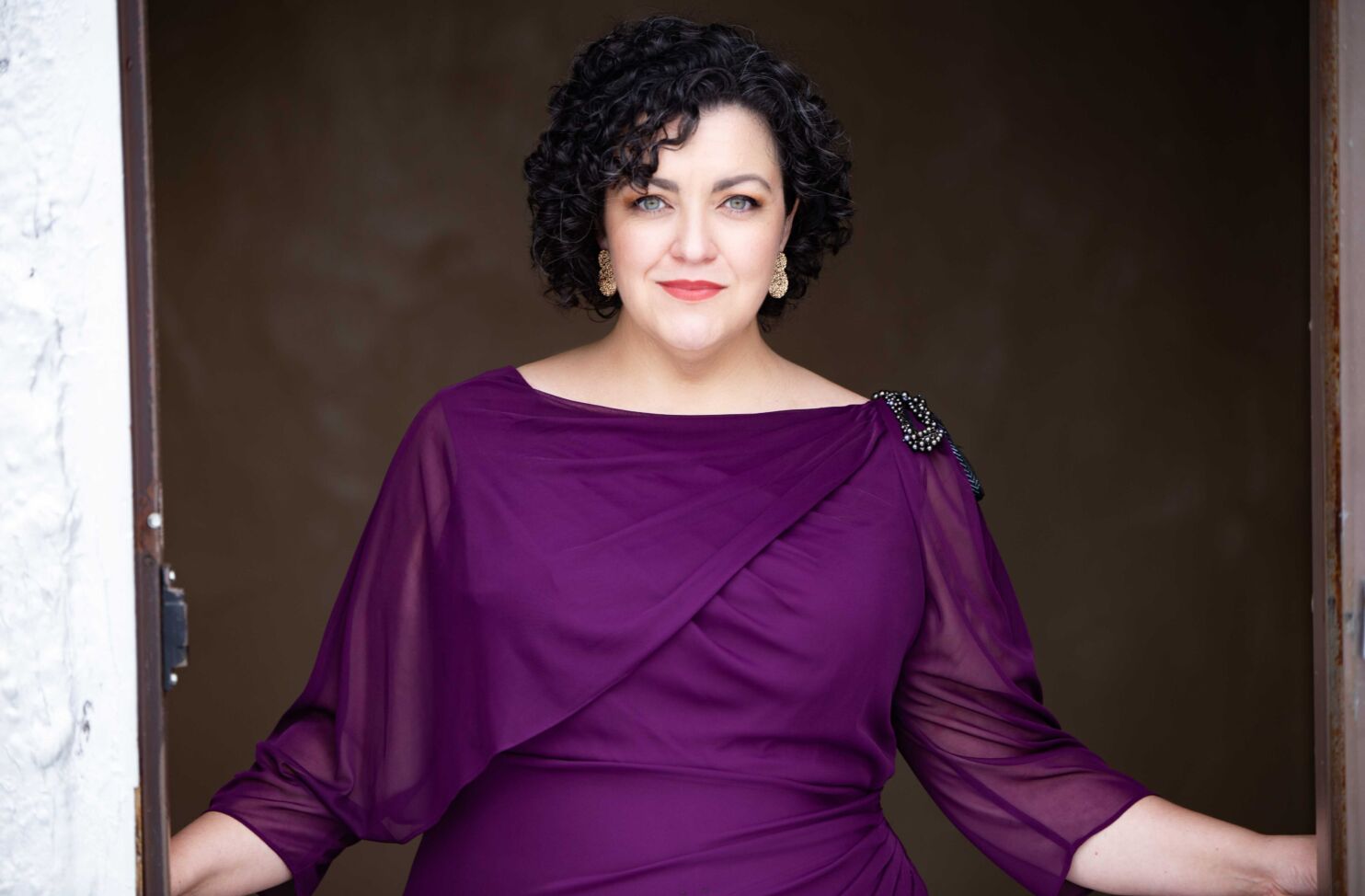 Described as “A sight and sound to behold” by the Boston Globe, Mezzo-soprano Ann McMahon Quintero is pleased to be joining the Santa Fe Opera in 2022 in one of her signature roles, Mistress Quickly in Falstaff. She will also be heard in the title role in Thomas Albert’s Lizbeth with Opera Orlando, as well as soloist in Verdi Requiem for the Defiant Requiem Foundation in Strathmore. Ms. Quintero opened her 2021-22 season with the role of Madame Flora in The Medium with Chelsea Opera, where she also enjoyed a successful run as the inimitable Julia Child in Lee
Hoiby’s Bon Appétit! in June 2021. In November 2021 she performed as soloist in Handel’s Messiah with the Santa Fe Symphony.

Known especially for her performances of Verdi and Baroque works, Ms. Quintero enjoys a career on the operatic and concert stage where her rich voice has been praised for “warm, honeyed tones” (Baltimore Sun) and “a beautiful color performed with full ease” (ConcertoNet) in portrayals of characters ranging from Amneris and Azucena to Mistress Quickly and The Old Lady in Candide.

Her previous work has included many enjoyable turns with Boston Baroque singing their annual Messiah as well as performances of Mozart’s Requiem, Beethoven’s Symphony No. 9., M. Haydn’s Requiem in C minor, Cornelia in Giulio Cesare, Juditha in Juditha Triumphans, and
Storgé in Jephtha. Quintero also enjoys a rewarding relationship with the Defiant Requiem Foundation, performing their powerful presentation of the Verdi Requiem in Defiant Requiem: Verdi at Terezín. She has performed the piece with Mo. Murry Sidlin over a dozen times throughout
the U.S., sharing the story of Rafael Schächter and the brave artists of Terezín. In addition, she has also performed the piece Hours of Freedom: The Story of the Terezín Composer, a program of music composed at Terezín.

Quintero made her international operatic debut with New Israeli Opera as La Haine in Gluck’s Armide and returned to the company as Marquise Melibea (Il viaggio a Reims). She sang Baba the Turk (The Rake’s Progress) with Angers Nantes Opera; Olga Olsen (Street Scene) with Opera Theatre of Saint Louis; Isabella (L’italiana in Algeri) with Palm Beach Opera; Gertrude (Roméo et Juliette) with Toledo Opera; and Glaša (Kátya Kabanová) and Teresa (La sonnambula) with The Santa Fe Opera. Other roles include Auntie in Peter Grimes, Tisbe in La Cenerentola, and Dritte Dame in Die Zauberflöte with Washington National Opera.

Quintero is a 2006 winner of the Sara Tucker Study Grant from the Richard Tucker Music Foundation; second place winner of the Licia Albanese-Puccini Foundation International Vocal Competition; the George London Foundation; Sullivan Foundation and was an Operalia semi-finalist. She sang at the National Endowment for the Arts Opera Honors Inaugural Awards Concert in 2008. She was a 2002 Grand National Finalist in the Metropolitan Opera National Council Auditions and made her first appearance on the Met stage in the Grand Finals Concert with Julius Rudel.

Like everyone, the pandemic left Ann with an embarrassment of time, so she followed the crowd and turned to baking sourdough and learning to play the ukulele. She also earned her certification as a yoga instructor and did a deep dive into learning more about social justice. Ann turned to her linguistic nerdery as a form of income and mental fitness through editing, proofreading, and some copywriting work. She fostered a wonderful pit bull named Ella and will provide more photos than you need upon request.

After such a long time away, she’s champing at the bit to make music with people again. “There’s nothing like the magic that occurs when people resonate together in the same room. Let’s make a ruckus together soon!”