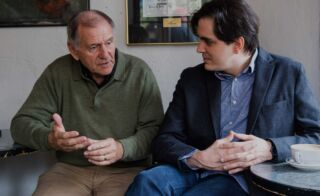 Although Vai has also been cast in some of rock's most desirable real-life roles during his career - including wingman for legends ranging from David Lee Roth to Frank Zappa - he's the kind of iconoclast who could never be musically typecast. Emerging during an era crowded with guitar hot-shots, Vai's prismatic virtuosity and sonic wanderlust made him unique and marquee. His playing can evoke a rhapsody, wild animal or surrealistic painting. Or just some molten rock 'n' roll.

The Alabama Symphony has almost always met or surpassed expectations with high-level performances at its opening Masterworks concerts. Friday was no exception.

Gripping tangos, modern soundscapes, a new composition by Alabama native Martin Kennedy—and Steve Vai? One of the great guitarists of all time? You bet. Alabama Symphony Orchestra’s annual Sound Edge Festival expands the definition of a night at the symphony to our surprise and delight.

Do you have your tickets yet to hear the Alabama Symphony Orchestra perform Opening Masterworks: Don Juan & Concerto for Orchestra? Bham Now has five reasons why you should. Get those tickets and mark your calendar. Performances happen Friday and Saturday, Oct. 19 and 20, at 7 p.m. at the Alys Stephens Center in Birmingham.

Maestro Carlos Izcaray has been extended through the 2022-2023 season.

On Friday, September 21, Alabama Symphony Orchestra will be holding one of their most popular concerts of the year, Birmingham Does Broadway, at Samford University’s Wright Center, featuring Broadway musical classics like Les Miserables, Wicked, Phantom of the Opera, King and I, Sunset Boulevard and much more.

Those yearning for live classical music after the summer hiatus must have been appeased Tuesday night at Brock Recital Hall, but not before a hefty dose of csárdás unexpectedly raised the excitement level.